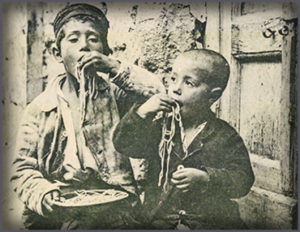 Gragnano is a small-town in Naples province,located at the foot of the Lattari Mountains. From ancient times, it has been famous all over the world for the fine production of pasta and the famous dry sparkling wine.
On 9 October, 2013 our city, considered the Capital of Pasta and the City of Macaroni, received the PGI mark (Protected Geographical Indication) from the European Community.
The Commission recognized to the “Gragnano Pasta” the ancient and traditional method by which the pasta is produced through the use of bronze dies.
The fame of our pasta is due to the several factors such as: humid climate of the Lattari Mountains, the low-mineral content waters of the Sorgenti Imbuto, Forma, Argentara and the skill of our “maccaronari”(macaroni producers) of all time , who have even given names to some pasta shapes, such as Zita, Mafalda, Tripolina, Macarone, Tagliolino, Mezzano, Regina, Reginella.

Over the centuries, illustrious figures have tested our pasta, among them : Garibaldi (who, leaving Naples for Caprera, brought a case of Gragnano macaroni which his family friend Domenico Della Rocca had sent him), the Duce, F. Nietzsche , Wagner and his wife Cosima Von Bullock, Totò, the De Filippo family, Susanna and Giovanni Agnelli, Lenin, Sophia Loren, as well as emperors, kings, princes and queens.
It is said that our fellow citizen Alfonso Sibilla, who moved to Venice with his wife, coming from that area, would make the Doge Giovanni Dandolo taste our “sgazzeri” aka gnocchi. 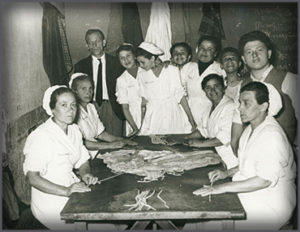 After tasting them he said according to popular tradition: “Really excellent!”. King Robert of d’Angiò and his wife, Regina Sancia (who died in the Sigliano quarter in honor of holiness), in 1383, 1394 and 1414 stayed in our village, at the palace of Don Nicolò Mariconda, who made him taste our pasta. The kings found it unique and exquisite.
King Ladislao and his mother, Queen Margherita, loved to spend long stays in Gragnano, whose pasta makers delighted them with sophisticated pasta dishes. The Spanish Royal , Isabella and Ferdinando, had some cases of “fusilli” sent by our lord Giovanni Miroballo, after having tested them thanks to some sailors. 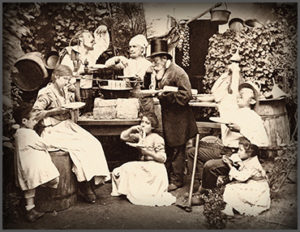 On May 12, 1885, King Umberto I of Savoy, accompanied by Queen Margherita and some ministers such as Depretis, Sandonato, Geniale and court dignitaries, came to Gragnano to inaugurate the railway.
The Queen tasted the “zuchillo” maccheroni, a tomato sauce pasta, while the King a broth with pasta. Finally the two Sovereigns and the whole Court refused the champagne, and preferred to drink the wine from the Gragnano vineyards.

On that occasion the manufacturer Santolo Malafronte offered the King (called the “Tappo” due to his short stature) a new pasta format, called “Mezzano” in his honor. While other manufacturers created “Regine e Reginelle” (Mezzane and Mezzanelle pasta ) in honor of the Queen.

According to an archive letter, the Consul of Sweden in Naples wrote a letter to Vincenzo Girace, our mayor, to receive information about the best pasta companies, in order to book cases of pasta for his Sovereign, King Gustav VI.
On August 22, 1935, King Vittorio Emanuele III with all his court came to Gragnano to give comfort to the Gragnano people affected by a disastrous flood. He was received by the mayor and lawyer Vincenzo Girace, and hosted by the Della Rocca brothers in their villa in Caprile.
During the banquet, they made all the guests taste our famous “barzanella fusilli” and the gorgeous dry wine of the Piano di Caprile. On 12 July, 1842 King Ferdinand of Bourbon, accompanied by his wife and his court, visited the long pasta factories in our country. The owners of the maccheroni factories and the workers gave him a hundred “tomoli”(an out-dated unit of measure) of our beloved and praised macaroni as a gift. 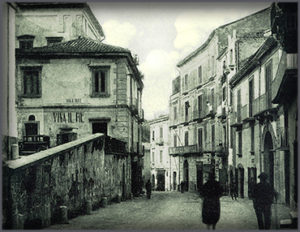 The Holy Mass, celebrated in the Corpus Domini Church, was followed by the banquet, which was provided by the Della Rocca brothers. During the banquet, it was offered to the guests a plate of a new pasta format called “macarone”, which was produced in honor of the King. Queen Maria Theresa of Austria, after eating it, exclaimed: “A macarone is worth a hundred spaghetti”. Instead, another pasta producer offered everyone a plate of pasta, with a new shaper: the “tagliolino”, created in honor of the Bourbon.
The King , after tasting it, decreed: “Macaroni are as genuine as the men of Gragnano”.

The owner thanked him by giving him some cases of “tagliolini”, which the cooks of the Sovereign also added to the Easter pastiera later.
Ferdinando became greedy of this pastiera and thanked him because his wife, who never laughed, after eating it, from that moment on, saw her smiling more and more.
At the end of the visit, the King granted the high privilege of supplying the court with all the Gragnano long pasta. The owners and workers took more care and attention in producing “Li maccarune de lu Re” (the king’s maccoroni). The King praised “fusilli” and wine stating: “Sublime!” according to the oral tradition of the quarter. 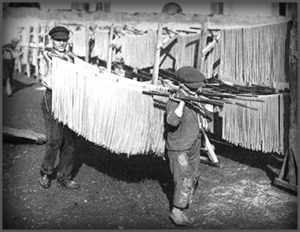 On September 27, 1953 then mayor, Professor Ferruccio Esposito, organized the first and unforgettable “Macaroni Festival” which had a wide echo all over the world. The industrialist Raffaele Carfora, bearing in mind the village’s impressive history of pasta, founded the pasta factory “Il Re della Pasta”, not only to pass on to posterity the apotheosis of our products over- privileged by the rulers from various European courts of a time, but also to delight palates from all over the world with its excellent pasta dishes, which are produced with durum wheat flour. Its products, all extruded through bronze dies , contain many qualities, to be tried for believing.

The company produces about thirty pasta formats such as paccheri (striped and not), helicoidal, calamarata, spaghetti, linguine, shells etc., as well as special formats such as fusilli and candelas. The factory, located in Via dei Campi, is run by the promising, venetian and nice daughter Valentina Carfora to whom I wish many successes in the sector in order to give more and more fame and glory to our beloved country.

by phone
By email